But, but, but, there is a lingering doubt – surely the devastation described in the Iliad was at the site of Troy, in eastern Turkey? Well no, actually not. That was another piece of romantic fiction.

The devastation was a world event of Ilium, the mortal isle of man surrounded the ocean of space, only much later rendered parochially as ‘Troy’ in the localised regional Greek version of universal folklore. Heinrich Schliemann’s Troy was an ancient city with a continental location and dimensions and chronology that could not possibly correspond literally to the descriptions of the Iliad. At Hissarlik in modern Turkey, he uncovered a ruined and burned city, of which there were dozens in the coastal Mediterranean that were destroyed in a regional annihilation in about 1200 BC. [1]

No, the final destruction of Ilium was caused not by a fanciful wooden horse, but by the impact of a massive iron meteorite – bringing fire, flood, earthquake and volcano. It left a deep pit – the largest ever known – which filled with water. And night drew her veil of darkness over the deep.

Mythology does provide some clues.

According to myth Phaethon Protogenus, ‘firstborn shiner’ with flaming hair, was flung from his celestial chariot like a falling star to be received by a deep cleft in the ground. Whole cities burned and peopled kingdoms into ashes turned. Far from his native land, in a distant part of the world, the great river Eridanus received him. [2]

The mortal dead were consigned to Phlegethon which was a great pool of fire; located at Eridanus, the great pit cleft in the Earth; which was at Styx, at the very ends of the Earth.

Separately, the later Greeks called the ancient Britons ‘Hyperboreans’ – literally meaning above Boreas, which was yet another name for the monstrous serpent (dragon) Ophion, or Typhon or Phaethon.

Taken together these allusions suggest that the offending object impacted at the furthest reaches of the world … in a region of water and fire … in a great hole  … in the ‘underworld’ … which the Britons were ‘over’ or ‘above’. All from a Eurocentric view.

Geographically interpreted these allusions point unambiguously to the north Pacific basin – a deep pool of water surrounded by a ring of fire, far away on the ‘underside’ of the world. ‘Under’ or geographically opposite the Britons who were ‘over’ the resting place of Boreas the dragon. That is why early European charts marked the distant waters of the ‘other side’ of the ocean with the admonition, ‘Dragons thare be!

The wound in the side of the mortal sphere became the motif for a succession of mythological characters. The lowly shepherd Anchises fell under the charms of Aphrodite (Venus when she veered too close to Earth), only to be struck in the side by a celestial thunderbolt after which he could never walk upright again. That is the same model as the Iliad’s Achilles, struck in the heel by an arrow; and of course the main theme of mortal Paris who seduced Helen (Venus) from the home of demi-god Menalaus (Mercury) only to be assailed by Apollo’s flaming arrows and ultimately struck down by  the iron meteorite of the dragon Boreas/Typhon/Phaethon. Likewise, the god/man hero Heracles (Hercules), a son of the gods, was struck in the thigh by an [iron] spear and walked thereafter with a limp.

Elsewhere, the Arthurian hero Lancelot was seduced by visions of Venus/Aphrodite only to awake suddenly and stab himself in the thigh, so he limped forevermore. While in the Grimm tale of Sleeping Beauty, the princess was pierced by a metal spindle delivered from the sky by a dragon, and she fell into a coma for 100 years.

Until finally, the old pagan motif was adopted by the Christian mythologists who had Jesus walk with a limp and ultimately be killed by a Roman sword thrust through his side.[3]  Of course, like Sleeping Beauty and Jesus, Earth was later resurrected.

All these fragmentary allusions from myth and legend identify a mortal wound caused by an iron spear, located in the NorthPacific Basin. Any lingering doubt is dispelled when the surviving sons of Aeneas much later sculptured a diagram into the earth and stone of the landscape of Armorica. A sculpture that endures to this day, including unmistakable detail of the Pacific crater with coded markers of the exact impact spot. More of that later.

Identification of the Pacific Basin as an impact structure also aligns with many other modern observations.

It looks like a typical impact crater – not a deep conical hole, but a relatively shallow ‘splash’ of a concave saucer with a raised rim, and a central ‘rebound’ peak. Just like the easily visible impact craters on the moon, including the recently documented ‘bullseye’ of the Orientale Basin. [4] And just like the equally enormous impact crater on the northern hemisphere of Mars – the Cyclopean eye with the gigantic rebound peak of Olympus Mons at its centre. Similarly, the Pacific Basin features a raised rim, especially evident as the US Rockies on the eastern arc, and a towering central rebound peak formed by the Hawaiian mountains Mauna Kea and Mauna Loa which rise about 10,000 m above the seafloor.  The still-active volcanoes around the rim form the Pacific ‘Ring of Fire’ – the Greeks’ Phlegethon. 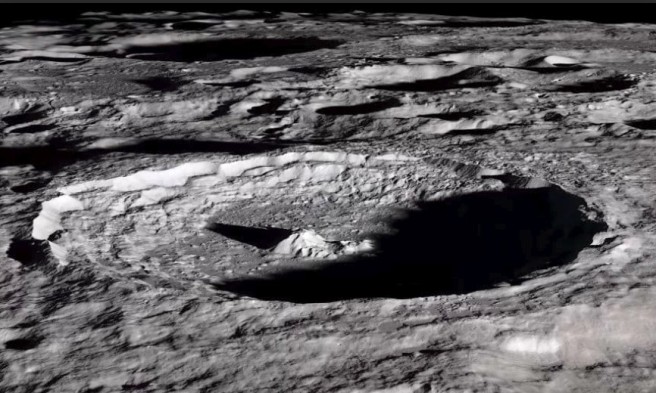 Hawaii was the mythological ‘Isle of Flames’ in the midst of the world ocean where, according to legend, there was once a great continent Ka-houpo-o-tane that now lies at the bottom of the ocean. Similarly, in the New Zealand Maori folklore their homeland Hawaiki was a ‘mainland’ with vast plains and a range of snowy mountains; while Samoan legend says their land sank into the sea, and the new land (present islands) arose from the womb of the last earth; and Tahitian tradition says the creator god overturned the world into the sea, and the earth sank into the water except for a few projecting points which form the current islands. That latter observation is reinforced by botanical exploration of Polynesian islands which has shown strong commonality in the flora, supporting the conclusion that many islands are remnants of a prior single landmass.

Both the Siberian and Alaskan sides of the northern rim of the Pacific feature huge deposits of frozen ‘muck’ containing chaotic remains of broken trees and dead animals – including well-known cases of whole intact carcasses of bison, mastodons and woolly mammoths. These preserved animal carcasses are consistent with ‘flash-freezing’ by a near-instantaneous catastrophic event, and the entire composition of the dead fauna and flora is characteristic of a warm-temperate climate – implying that the latitude has been displaced by tilting of the polar axis.

The Pacific hemisphere exhibits anomalous magnetic behaviour – attributed to an ocean-floor layer of metallic conductivity caused by high concentration of iron oxides and iron sulphides.[5] Others have noted the widespread occurrence of ferromanganese nodules on the sea-bed, and the young layer of red clays containing very high levels of iron and nickel. Since nickel and manganese are virtually absent from sea-water it follows that the presence in young bottom layers must be both external and geologically recent.  The layer of red iron oxide clays could be considered ‘natural’ (terrestrial), but the occurrence of iron and nickel together can only imply a source from extra-terrestrial meteoric nickel-iron. Further, the known total quantity of nickel in the sediments allows a calculation of the corresponding input of meteoric material – which turns out to be ‘very high’, over 1000 times higher than could be attributed to the gradual background rate of accumulation of meteoric dust.  Put plainly, the quantity of nickel in Pacific Ocean sediments can only be attributed to a very substantial meteorite fall. [6]

Finally, the largest known meteoric ‘tektite strewn-field’ in the world extends right across the mid-Pacific.[7] Tektites are small pieces of fused silica glass directly associated with known impact craters – the tears of the gods. And the flood basin basalts of the western equatorial Pacific – also the largest on Earth, historically attributed to volcanic mantle plume – have recently been shown to be not caused volcanically, but consistent with melting caused by a large meteorite impact.[8]

Bottom line, the North Pacific Basin is firmly identified as a massive impact crater rimmed by a ring of fire of still-active volcanoes. It was the mythological Styx and Hades – the region of death and despair. It was Hell.

But, heeding Cassandra’s warning, Aeneas and his kin had already sailed away to safety.