Now the pyramid ‘Great Lights’ were physically ready, except for the heat source … and except for the water supply. Remember the whole point of making great lights was to produce steam … to make a mist go up and rain to come down. So all the pleasant plants and crops grew again.

They needed a water supply – that is why the pyramids were built close to the water’s edge along the river bank.

Today we tend to focus on the ‘mystery’ of the body of the pyramid itself but originally they were also each surrounded by a stone pavement and a 10 metre wall; with a ‘temple’ building at the base of the pyramid linked by a uniform sloping ‘causeway’ to a similar ‘temple’ at the water’s edge. The ‘causeways’ were constructed to a regular uniform slope, often to a significant distance over uneven ground. The causeway of the Great Pyramid extended about 800m over gullies requiring buttresses up to 40m high and two bridges.  Herodotus recorded it in 445 BC, remarking that the construction rivalled the pyramid itself – but it has long since been destroyed.

The auxiliary buildings were called ‘temples’ by early Egyptologists who perceived everything as religious, and the name has unfortunately stuck. Even though modern scholars (like Harvard’s Lehner) have reported that no traces of mortuary or funerary facilities have ever been found in them. Because they were not religious funerary temples – they were part of the water supply system. 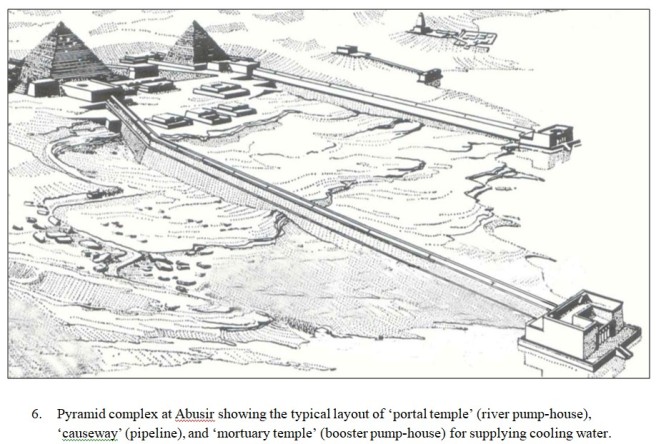 The pyramids were definitely ‘bathed’ by water. The original Egyptian texts say so and there is a first-hand eye-witness account from Greek historian Herodotus who visited in about 445 BC.

Referring to the ‘Cooking Pot’ of the pyramid the Egyptian Book of the Dead said … the lord of the earth, the protector giveth cool water … fresh water from the river in abundance shall be offered to him [it].  While the hieroglyph for Userkaf’s 5th dynasty Sun Temple at Saqqara showed a stylised pyramid mound with a bulbous ‘mast’ on top, like a sprinkler head. Very much later, when reality had descended into religion, the required process of dousing the pyramid with water was ceremonially memorialised. In ‘religious rituals’ every morning and evening priests would walk around the pyramid sprinkling it with ‘holy water’ in a ritualised re-enactment of a long forgotten reality.

The physical reality remained until at least 445 BC when the Great Pyramid was observed first-hand by Herodotus. He wrote (in translation from Greek) that the pyramid was ‘surrounded’ by water introduced by a canal … which has always puzzled commentators since the Great Pyramid sits on the Giza plateau well above the river level, even in ancient times. However, only a page later he adds the explanation that the Nile water was introduced through an artificial duct. [1]  Which since it was uphill can only imply a pipe, and instead of the translated term ‘surrounded’ it would be more informative to say that the pyramid was ‘bathed’ or ‘doused’ by water.

That the ‘artificial duct’ was a pipe was also implied by physical remains. One very common item amongst Egyptian artefacts is what has become known as a ‘pillow’ – originally made of haematite, ironstone. These ‘sacred religious’ items were known as ‘pillows’ of the gods – composed of a narrow concave semi-circular saddle on a single short pedestal. They look exactly like modern day pipe stirrups – pillows for a pipe – designed to support a pipe while allowing it to flex.  It was a ‘sleeper’ pillow mounting, but for a pipe not for a person.

Another even more intriguing relic of related technology includes a circular stone article which languishes in the Cairo Museum under the label of ‘plate of unknown use’. It is dated very early (ca 2900 BC) by context and is finely sculptured in very hard slate.  About 600 mm in diameter with a central flanged hole for mounting on an axle or drive shaft, the item has the appearance of a perfectly symmetrical mechanical device … with a functional aura for all the world like a pump rotor or turbine blade. It looks like the rotor or impeller of a pump!

Against that background, it can now be seen that the riverside blockhouse style building – the so-called ‘portal temple’ – was actually a pump-house, and the similarly styled ‘mortuary temple’ at the base of the pyramid was actually a booster pump-house to raise water to the top of the pyramid. The ‘causeway’ in between was the gradually sloped foundation bed for the pipeline.

In the orthodox scheme of things, the hypothetical body of the dead Pharaoh was supposed to be ceremonially shipped along the Nile, received at the ‘portal temple’, paraded up the causeway, finally prepared in the ‘mortuary temple’ and interred within the pyramid. But from the very outset of European exploration, the Egyptologists themselves noted that all this was physically impossible. The causeway ‘path’ was totally enclosed like a tunnel – too small for access of a ‘parade’ and anyway out of sight of supposed spectators. In the late-1800s famous British Egyptologist Flinders-Petrie went out of his way to remark that the tiny rooms of the ‘temples’ were connected by very narrow passages and small doorways with tight right-angle bends that would not accommodate even a normal size coffin – let alone the Pharaoh’s massive stone coffer. Physically impossible! And now in a 1997 review, Harvard Egyptologist Lehner has reported that no ‘funerary’ remains at all have ever been found in any of the supposed ‘temples’. The hypocrisy of Egyptologists is staggering. Their own evidence proves that the ceremonial ‘Pharaoh Internment’ scenario is implausible.

Contrariwise, the ‘temples’ were built of massive Cyclopean scale stone in a plain blockhouse style with few doorways and almost no windows. They did not have any ceremonial religious ambience but on the contrary a plain unadorned functional aura.

A modern plan diagram reconstructed from the ruins of the ‘portal temple’ of the 2nd pyramid at Giza shows a profile which looks exactly like a blueprint for a pump-house. Twin intakes extend on a downward slope 40m underwater into the Nile – leading into a common manifold connected to an enclosure (pump?) –  in turn leading to a single narrow outlet (pipe?) extending up the causeway.

It looks exactly like the blueprint of a pump-house.

Incidentally, the base of the ‘portal temple’ at the river edge was constructed of huge blocks of granite and basalt, estimated at 1-200 tonnes each, precisely formed and placed perfectly in alignment. How did noble savages manage to do that?  Granite, and particularly basalt, is very, very hard and cannot be cut by metal tools. Also, later Middle Kingdom religious rituals included a ‘temple building ceremony’ described as a sacred religious practice in which the second step was ‘scattering gypsum on the area to purify it’. Collectively these features merely illustrate that the early lords had a grasp of commonsense engineering principles – to use foundations of hard stone rather than limestone where it would be subject to water erosion, and to stabilise the subsoil with gypsum just as a house-builder still does today.

Now with a water supply assured the engineers still had to calibrate the heat source. They had to turn up the heat enough to generate steam, but not so much as to cause structural damage to the pyramid. It was a fine balance.