Not only were the nuclear components identified but it was also noted exactly where they came from and how. There were even hints of how the device actually worked at an atomic level.  Yellowcake uranium came from the remote desert site of Kerma in Nubia, and the milk from the enrichment centre was at the ancient ‘sacred’ site of Abydos in central-southern Egypt. Details were etched in stone on the stele of Iritsen, ca 2100 BC …

‘I know the mystery of the divine Word … give Osiris [the son of the sun] a meal of bread and drink … cakes of the Lord of Abydos, [and] white cream of the sacred cow.’

The Pyramid texts were quite explicit that the food of the gods came from the remote town of Sau (Sai) in Nubia, at the bend in the Nile in the same region as Jebel Barkal where the early nuclear tests took place.

… may you eat the food of the gods. The savour of Ddwn, the youth of Upper [southern] Egypt who issued from Nubia, is on you; may he give you the incense wherewith the gods are fumigated.

Hail thou who bringest thine offering, who comest forth from the city of Sau (Sai).

Take thy incense from Nubia, thy bread is the bread of god …the odour of Ddwn the youth who is from Nubia, he gives incense wherewith the gods cense themselves.

The site of Kerma has been thoroughly explored and documented in modern times. It is little more than an isolated mining camp covering only 25-30 hectares, oddly completely enclosed within a 9 m high wall and including several large ‘industrial’ style buildings.  Archaeological records include an inscription of ‘an offering formula’; an illustrated figure captioned ‘Overseer of the [building?] for the divine offerings’; and notes that high ranking officials wore curious ‘masks, wigs, or capes’.

The odd buildings included a large conical structure with a false floor, exactly like a kiln; another very large rectangular ‘palace’ with multiple storage rooms for ‘commodities’, and an archive of thousands of small blank seals used for officially labelling goods. Wall murals showed a production line of women grinding with pestle and mortar equipment; and numerous illustrations of fluid being poured into large bronze cauldrons. Altogether the excavators concluded there was ‘a clear indication that [industrial] business of some considerable scale was transacted at the site’. [1]

The Pyramid Texts described a parallel series of steps whereby the ‘earth’ was hacked, bathed, purified by libations, made clean and dried:

The earth has been hacked for thee, the wdnt offering has been made for thee…

I am the essence of a god …the followers of Horus cleanse me, they bathe me, they dry me, they recite for me the spell [formula] for Him who is on the right way

my hinder parts are made clean with the things which make clean, and my inner parts have been dipped in the lake of Truth

behold, impurity of every kind hath been removed from me.

This process produced ‘food’ offerings with evocative titles such as ‘Power of the Water’ and ‘Innumerable Water’ – where ‘water’ is a mistranslation of ‘waves’, meaning radiation waves. The food was explicitly for an ‘Offering to the Great God, Master of the Horizon [pyramid].

Notably, high officials wore safety clothing including masks, but the mere operators did not. Texts record that the workers were occasionally in revolt and an envoy of the Pharaoh was sent ‘to punish and afflict according to thy decrees … mankind who comest from Sau …whose faces are without coverings …and who make calamities to arise’. Poor ‘mankind’ evidently suffered from what they called … evil things of all kinds … and the town cemetery contained an astounding total of over 30,000 bodies.

Incidentally, in these text references, yellowcake is derived from ‘earth’. It was dug up (hacked) out of the ground. This accounts for the phrase ‘heaven and earth’ which is common throughout Sumero-Babylonian, Egyptian and later Hebrew/Biblical literature. In Sumeria it was the ‘director of the host [array] of heaven and earth’ who made the windstorm; while a later Abraham was said to be the ‘possessor of heaven and earth’; and an even later Socrates got into big trouble for revealing the ‘secrets of heaven and earth’ to the youth of Athens.

The ‘host’ of heaven and earth was the particular geometric matrix array in the coffer.

Although early Christian Church fathers had long since forsaken any technical understanding, they ironically adopted the phrase ‘heaven and earth’ in the very foundation of their doctrine in the Nicene Creed … We believe in One God … the maker of heaven and earth … Light of Light.

But ordinary yellowcake was not good enough – it had to be enriched. For that purpose it was sent to Abydos, another remote desert site in central Egypt occupied from pre-dynastic times and with significant ruins dating back to at least the 1st dynasty. Again the texts are explicit that the crude ore was taken to Abydos to be made ‘mighty’ [stronger] … I have come that I may establish offerings in Abydos … pure is the efflux which was drawn from you which was made in Rosetjau [Kerma]  … may you be mighty [stronger] in Abydos.

There the ore was enriched by serial diffusion through a membrane later characterised (in translation) as a wine press, purification tent or fishing net; or by centrifugation in a ‘whirlwind’. It was naively perceived, in translation, that the membrane or net caught the ‘big inactive ones’ (U-238), but allowed the ‘little active ones’ (U-235) to pass …

…you shall not trap me because I am the small one [U-235] … I know the name of the weights … I know the measure of the mouth of the opening in it [the net] … I will be the one who flies from it as a small lad … I have escaped by flying.

Processing by diffusion or centrifugation entails hundreds of serial repetitions requiring a massive building characterised by repetitive cellular rooms – like the US uranium enrichment facility at Oak Ridge, TN.  That is exactly how the early Old Kingdom lords did it. The 1st-2nd dynasty kings built massive brick structures with repetitive cellular rooms which, in garbled translation, were uncertainly called ‘galleries’ or ‘magazines’ related to the function of the ‘purification tent’.  The single largest structure covered an astounding 5000 sq. m. and belonged to 1st-2nd dynasty kings whose names meant ‘The Appearance {separation?] of Two Powers’ and ‘The Two Powers are Pacified’ [separated?]. Part of 2nd dynasty Khasekhemwy’s so-called ‘funerary building’ still stands with mud brick walls 11 m high and 5.5 m thick covering 5000 sq metres. The exterior walls were plastered and painted with white stucco with a 3-4 inch wide red band at waist height – intuitively declaring ‘danger’, entry prohibited. That is a massive construction for around 3000 BC – not a tomb or temple or memorial but a functional building. Its enigmatic name survives in Arabic as Shunet es Zebib – meaning ‘Storehouse of the Flies’ – apparently alluding to the ‘little flies’ (U-235) of the Coffin Texts who said you cannot trap me, I will escape by flying.

So yellowcake was enriched at Abydos to produce what the text translations characterised as ‘the efflux of Osiris’ – or sometimes the incense, or perfume or unctions – which were all 19th-century attempts to render the invisible and then unknown properties of nuclear radiation. 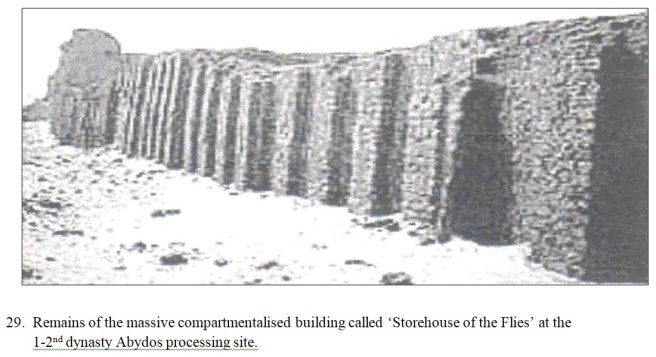 Text references are quite explicit that the purified liquid (milk) efflux came from Abydos and was taken to the pyramid:

I bring the things of Abydos … the efflux of Osiris is lifted up to the island of Fire [pyramid] …  I set aside the evil … I know the mysteries that are in it … the god has gone through the purifying liquid in the re-generating place … in the Re-generation place where they make the unctions … in the Four Places of Regeneration in Abydos.

19th-century linguistic scholars obviously struggled with the then-unknown concept of nuclear radiation, but the Old Kingdom lords of Abydos just as obviously knew what they were doing and left behind a diagram so that we might find it later and understand. They knew that neutron emission potentially caused a chain reaction – which they portrayed as the ‘flower of life’ – and left behind a diagrammatic representation on the wall of the Temple of Osiris.

One atom (of U-235) emitted a neutron which bumped into another atom which emitted another neutron … which flowered into the infinity of the ether. Unfortunately for a long period we lost the capacity to understand that technically and instead descended into metaphysical notions of ‘god’, such as the Hermetic profundity … Deus est sphaera infinita, cujus centrum est ubique, circumferentia nusquam. God is an infinite sphere whose centre is everywhere and circumference is nowhere.

But the lords of the Old Kingdom transported the magic efflux of Osiris to the Great Pyramid where they tried again to make us understand. 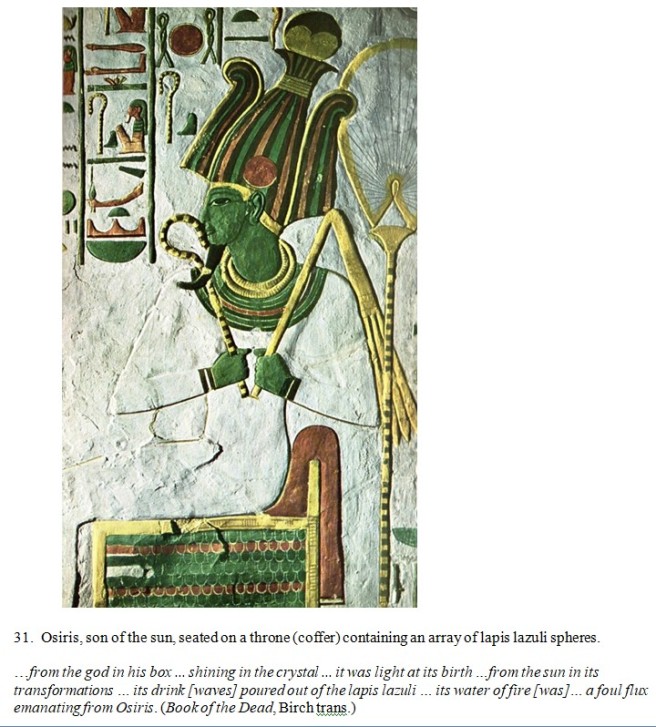