‘This book contains the knowledge of how to achieve transformation of substance into light!’

European scholars didn’t understand that and didn’t want to understand it. But oddly enough it had been recorded in ‘native accounts’ … which claimed that ‘a [pyramid] chamber enclosed the secrets concerning disintegration of matter’. [1] Of course, colonial Europeans didn’t believe that either since ‘native accounts’ were viewed as ‘fabulous’ and ‘unreliable’, probably induced by hallucinogenic substances.

But the Egyptian texts do contain that sort of language … even in translation:

… the unformed substance … firstborn son of matter … who dwelleth amid decay.

… I am the oldest and firstborn son of matter. I came into being from unformed matter.

Students of atomic physics will recognise hydrogen – the first atom, as a dot in the midst of a circle. Invisible, indivisible, immeasurable, before everything, in everything, after everything. The one.

However, it’s one thing to express a conceptual theory but another to design and implement an actual nuclear device. How did the ancient lords actually build a device?There is no simple answer. There is no single paragraph or passage that provides a recipe. There are volumes of literature; hundreds of relevant words and phrases; dozens of illustrations in texts and on the walls of temples and tombs.

There are some important clues. We know the sequence of events, or at least the later perceived ‘religious’ series of events.

We know a ‘dead body’ was placed in a stone coffer.

From earlier Sumerian sources we know that the ‘House Causing Light’ was also called the ‘lapis lazuli house’ of the ‘seven spheres of heaven and earth’.

The ‘body’ was ritually fed with ‘cakes and ale’ to sustain it on the journey of transmogrification.

And it was subject to the intense scrutiny of the ‘Negative Confession’ to make sure it was the correct weight and faultless.

Before it was carried up the ‘stairway to heaven’.

To be sealed in a stone chamber called the ‘Cooking Pot of Horus’ from where it transubstantiated into the divine light of light, of Ra.

With those major pointers, we can trawl the Egyptian texts for more detailed information.

But before doing so – there is a problem with the perceived ‘religious’ sequence of events. We know the prior ‘real’ events (of the Old Kingdom) cannot have been implemented from outside the pyramid(s) because the stone coffer (weighing about 3 tonnes) cannot have been feasibly manipulated through the narrow doorways and passages of the so-called ‘temples’. Indeed, it has been long recognised that the stone coffer in the upper King’s chamber of the Great Pyramid must have been built-in during construction – because it is too big to have been inserted through the entrance passages.

The key lies in the unusual structure of the inner chambers and passages of the Great Pyramid.

Where almost all the other Old Kingdom pyramids have a single simple internal chamber, the Great Pyramid of Cheops at Giza has a precisely engineered complex of chambers.  It must have had some distinct and significant functional purpose, differentiated from the other single-chamber pyramids. Notably, Cheops (Khufu) was particularly remembered throughout Egyptian history as an evil King.  Right down to Herodotus’ visit in 445 BC, Cheops was still vividly remembered for ‘destroying multitudes of men and bringing affliction to Egypt for 150 years’. As if he alone were responsible for the great calamity when the lights were turned on? [2]

Function follows form. From literature allusions along with surviving illustrations, it is possible to see that the internal structure of the Great Pyramid corresponds with the ‘religious’ sequence of events. It had a lower (Queen’s) chamber for preparation, linked to a sloping Grand Gallery (the stairway to heaven), leading to the upper ‘Cooking Pot of Horus’ where the manifestation of energy took place.

The ‘real’ events took place inside the Great Pyramid.

The lower (Queen’s) chamber was distinguished by a rough unfinished floor, recessed below the level of the adjacent horizontal passage; and it had a descending- tiered niche in the wall. The lower floor allowed for a false wooden floor on a simple beam balance – to check the coffer for correct weight. The tiered niche in the wall was a storage slot for the weights – large weights at the bottom for taring the empty coffer, then smaller ones at the top to get the final load exactly right: 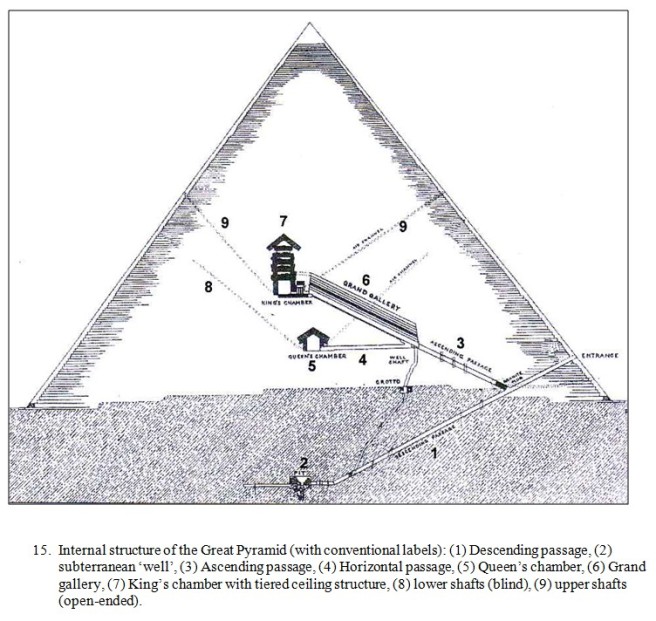 The process of weighing heaven and earth in the balance was managed by Thoth (Tehuti meaning he who balances, or weighs); and Isis, whose symbols were a set of stone ‘steps’ (actually weights) and a ‘sistrum’, like a tambourine rattle which was in fact an abacus for keeping tally. Incidentally, Isis, Mistress of the Temple, had a fair complexion and blue-eyes and she was assisted in the cramped passages of the pyramid by a team of dwarfs – hence the folklore legend of Snow White and the Seven Dwarfs, who worked in the mines for ‘diamonds’ (the sparkling crystal stars). Keeping a retinue of dwarfs passed into court custom of latter-day Pharaohs and remained fashionable in the royal courts of Europe until the 17th century.

Once loaded and checked the coffer and its inert (dead) contents were ‘ferried’ along the polished floor of the horizontal passage by simply sliding it on a film of water. This was explicitly depicted in numerous illustrations which show the ‘royal barge’ as a solid rectangular coffer artistically embellished with boat ends, floating on a very shallow strip of blue ‘waves’. The artistic licence of the ‘boat’ illustrations was confirmed in the texts: the boat] has no planks, she has no end pieces, she has no rubbing pieces, she has no oar loops … she has no spars, she has no rigging.

At the end of the Horizontal passage the coffer reached the bottom of the Grand Gallery identified in the texts as a ‘dark cavernous valley with sheer walls’, where it was set on a wooden (Acacia) gantry to climb the slope:

…let a path be made for Osiris in the Great Valley …O Lord of the Acacia tree, the Seker boat is set upon its sledge … the gods make a ladder for you that you may ascend to the sky.

The gantry (and coffer) ascended the Gallery by means of a counter-weight system connected by endless ropes – detailed in the texts:

… the serpent his job is to rise up with this image … and he entereth into his tail and cometh forth from his mouth [ie. an endless loop]

…he who is in the Hnw boat … descendest on copper cables … [or] towed by ropes of iron.

The counter-weights were hydraulically mediated blocks of stone in the ‘Ascending Passage’ – more of that later.

As the gantry climbed the slope to heaven  … the Seker boat maketh its way in the valley … [the wheels] … go round about bearing the fiery eye of Horus … ratchets on the wheel spokes engaged with paired notches on the lower side walls – ritualised later as pairs of judges in the Hall of Maat who issued challenges at every turn.

Until, at the top of the gallery, the coffer reached the upper (King’s) chamber with the declaration:

… I have come to the place of my contentment … which is the Horizon [radiant place] …the great double house …the house of fire.

… the cavern, the cooking pot of Horus … [where] the king comes into being … by means of great magic.

…  Ho Crown great of magic …make them to know the terrible power of him. 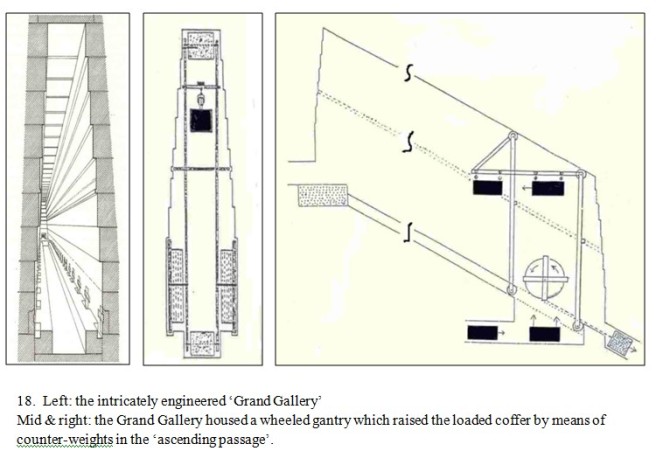 This was the original real process – the lords prepared an inert nuclear device in a stone coffer, carefully weighed it to make sure it was just the right size, ‘fed’ it with something to give it energy, raised it in steps on a wooden ladder mechanism into a sealed stone chamber – where it ‘cooked’ for three days until it manifested an incandescence of solar energy.

Perhaps a thousand years later in the religion of the Middle Kingdom, Egyptian high-priests humanised that story into a version where the dead Pharaoh – as the claimant descendant of Osiris the son of the sun – was fed cakes and ale, purified by 21 pairs of negative confessions, paraded for popular adoration, climbed the ladder to heaven in the pyramid from where he vaporised into numinous solar union with Atum-Ra in the heavens.

Then, another thousand years later, Christian priests concocted a new version where a new claimant son of god, fed his devotees on bread and wine, was condemned to death, paraded in public up the hill of Calvary through 14 stations of devotion, suspended on a wooden frame, died and was buried in a stone chamber – where after 3 days he rose again in an ineffable solar aura to join with his father in heaven.

They were just stories. Metaphors.

All of that explanation – the real explanation – is consistent with the internal structure of the Great Pyramid. But there remains one obvious question – if all that is correct then we would expect to find signs of fire and heat inside the upper (King’s) chamber? 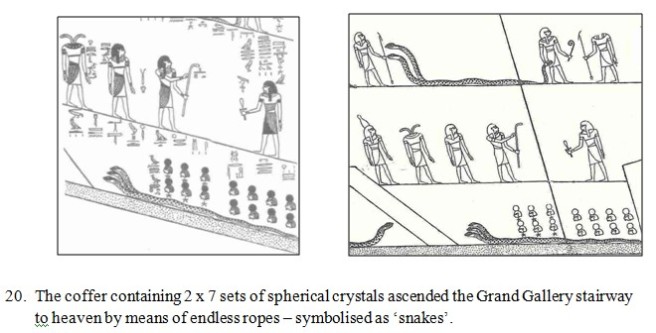 Egyptian lords placed a stone coffer of inert lapis lazuli in a stone coffer in the ‘Cooking Pot’ chamber inside the pyramid, where after three days it blossomed forth an inflorescence of nuclear energy – which later Egyptian ‘Followers’ called the ‘God Osiris’, son of the sun who rejoined his solar father in the heavens.

Christian iconographers humanised the imagery by conjuring a new mortal ‘son of god’ Jesus Christ, placing his dead body in a stone coffin, from where after three days he rose again in a sunburst of light to join his father in heaven. 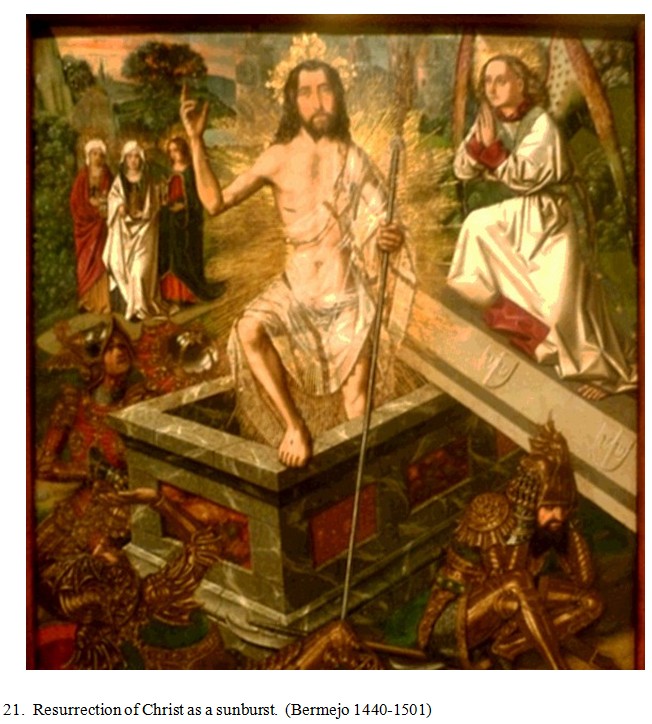